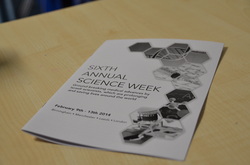 
“Understanding our Genome: From Patients to Families and Communities”.

Professor Tzipora C Falic Zaccai, MD , Associate Professor of Medical Genetics and Paediatrics, and the founder and Director of the Institute of Human Genetics. Professor Zaccai  talked about her research into the identification of the causative genes of rare genetic diseases, which affect patients, their families and their communities. She told us about her involvement in the population screening programme to reduce the incidence of genetic disorders, and about a model system in zebra fish for studying the mechanism of certain disorders. 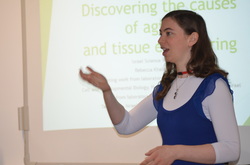 Rebecca Khalandovsky, B.Sc, Princeton University, now a researcher on a Fulbright Scholarship in Dan Kaganovich’s lab. Rebecca talked about using tissue engineering approaches to growing pancreatic cells that can then be implanted in diabetic patients to ameliorate or treat the diabetes. She also talked about  work in Dan Kaganovich’s lab, using yeast to investigate the mechanisms behind cell aging.

Eyal Baror, M.Sc. CEO of Neuronix, will talk about an electric charge to brain that claims to stop Alzheimer’s Disease in its tracks. His talk will include a review of Alzheimer’s Disease, exiting pharmaceutical interventions, explanation of Neuronix technology using magnetic fields and specific cognitive therapy approaches. There was a brief introduction to promising results from clinical trials and a consideration of future prospects.