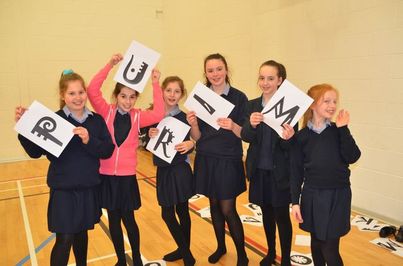 The pre Purim Activity Afternoon began with a fund raising bingo session during lunchtime.  Rabbi Goodman decided to hold a charity bingo event at lunch time for years 7 – 10 in order to raise money for Leket.  The event was a huge success and the students that participated raised £3000 and had a great time whilst playing bingo.

Quote from Samuel Rabinowitz in Yavneh Boys - Year 7 who won the first prize which was half hour helicopter ride for two around Manchester “ Bingo was great, the raising money was fantastic and I am so excited to go on the helicopter“.

The afternoon continued with lots of fun and educational activities which were delivered by the Jewish Studies Dept and Aish Manchester.

The activities included Purim treasure hunts and a Purim themed team building game and many more events.  Students in year 7 also had the chance to learn about separating Challah and experienced a practical demonstration delivered by Mrs Pearson who is manager of the kitchens .  After her demonstration students had the opportunity to make Hamantashen which they all ate by the end of the afternoon.